Accommodation availabilities
Agenda
All Agenda
Accessibility
Theme:
Text:
Share :
Tweet
Surely everyone's heard of Marseille!
This city in the Provence Alpes Côte d'Azur region has a rich cultural heritage, with the old port, typical Marseille districts that have been made famous through film and television, the Notre-Dame de la Garde basilica... and of course its natural side with the Calanques de Cassis and its beaches, its rich cuisine including the famous bouillabaisse soup, navette biscuits, pied-paquets lamb stew, aioli garlic sauce, to name a few of its delicacies. 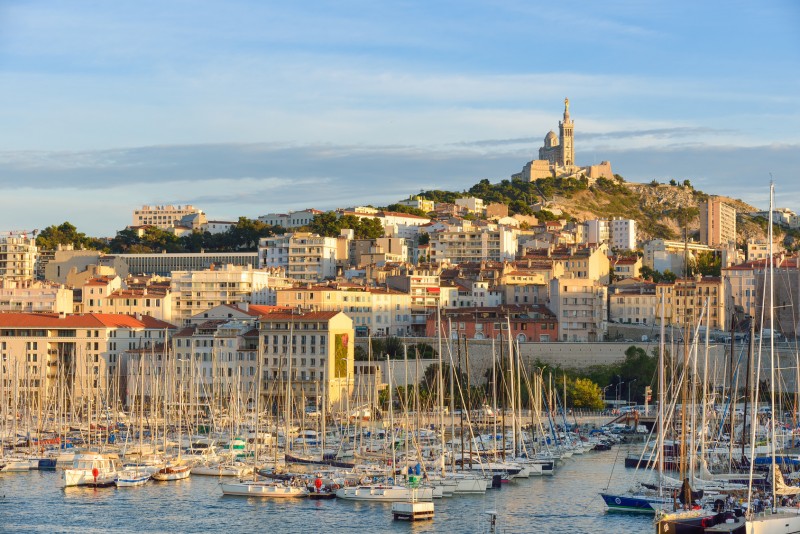 If you stop over in Marseille, there are a few unmissable places to see in the Phocean city. There is no shortage of important buildings and places...
Start your visit at the Canebière, a long shopping street that starts at the église des Réformés (Reform Church) and goes right down to the Old Port.
What would Marseille be without the Old Port? Ever since Antiquity, it has been a symbol of the town, witnessing the arrival of Greek, Roman and medieval civilisations one after the other. Today it has become the nerve centre of Marseille. Renovated in 2013, it is now an unmissable place of leisure for everyone, for taking a stroll, eating, stopping for drinks in a bistro under the southern sun, or buying Marseille soap from the souvenir shops.
Continue your walk on to Notre Dame de la Garde or the "Good Mother" as it is known by the people of Marseille. Whether you're Christian or not, this basilica built on La Garde hill is well worth a visit, with its exceptional panoramic view over the open sea and the islands. An emblematic sight for Marseille, Notre Dame de La Garde looks after sailors, fishermen and the people of the city.

The Château d'If and the Frioul islands
Take a boat trip from the old port of Marseille out to the Château d'If. This former fortress built by King François I was turned into a prison. It became famous through Alexandre Dumas' novel, the Count of Monte Cristo. It stopped being used as a prison in 1890, and is now open to the public.
The Frioul islands off the coast of Marseille are made of limestone rock. People head out there to relax, laze around and enjoy the pretty beaches, the view of the calanque cliffs, the creeks... The micro-climate of these islands makes them a haven for birds, and they are home to hundreds of species of flora.

European capital of culture in 2013, Marseille is packed with monuments and museums, including the most recent and famous MuCEM! An architectural jewel built in June 2013, this museum bridges the divide between the Mediterranean civilisations. Exhibitions, collections, shows, you'll be overwhelmed with choice!
Just next door is the Villa Méditerranée. Just as impressive as its neighbour MuCEM, it is dedicated to the various forms of expression found around the Mediterranean basin.
Other places to discover:
- The 5th-century Abbey of Saint Victor, symbolising the growth of Christianity in Provence, offers a magnificent view of the Old Port.
- La Vieille Charité, a 17th-century hospice that is now home to several exhibitions, including the Museum of Mediterranean Archaeology.
- La cité radieuse, designed by the famous architect Le Corbusier. Built just after the war, this building applies the concept of "Unité d'habitation", or unified living, and was completed in 1951.
- The Cathedral de la Major, with neo-Byzantine influences, built in the 19th century, will surprise you with its unusual dimensions. 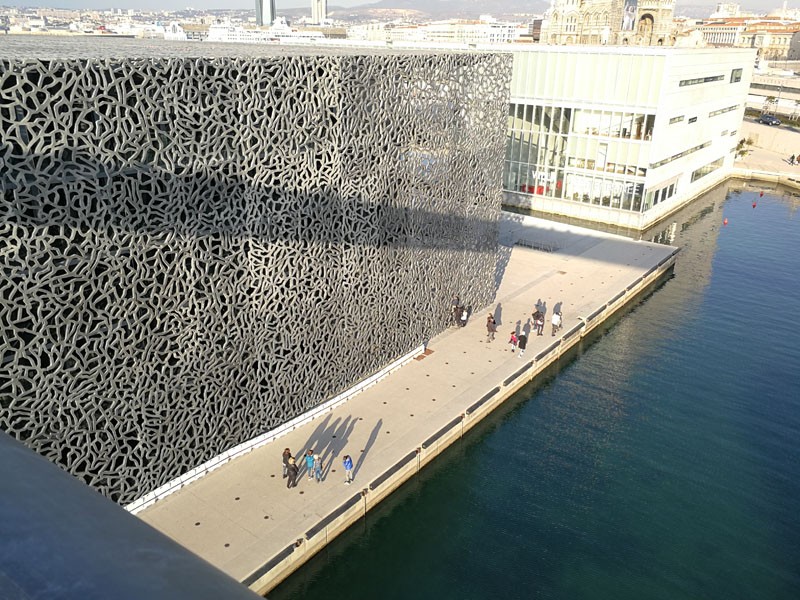 L'Estaque, this little port in the north of the city is one of the prettiest districts of Marseille. With its unrivalled charm, you'll be seduced by the beauty of this place and the atmosphere that it exudes... villas, traditional houses, fisherman's shacks – the neighbourhood is a real haven of peace where you can go for a hike or just take a stroll along the quays.
Don't forget to try the Marseille specialities, the famous bouillabaisse soup, panisse chickpea fries and chichi fritters!
The Panier district is one of the oldest districts in Marseille, not far from the town hall, you'll be charmed by its narrow streets, artists' galleries and tiny shops. The district has also been made famous by the TV series Plus Belle La Vie, whose sets were largely inspired by it. It has a few monuments that are worth seeing, such as the Fort Saint Jean, the Cathedral de la Major or la Vieille Charité...

Returning to the sea, there are 2 districts worth a visit, one next to the Calanques and one not far from the old port.
Le vallon des Auffes, 3 km from the old port, owes its name to a grass plant that was used to make rope for the boats. This little port has quite the magical aura... with its picture postcard landscape, it's the perfect place for a stroll, watching the little pointu fishing boats coming in to the port and savouring the local cuisine in traditional or high-end restaurants.
Les Goudes is another little port, and a favourite meeting place for the people of Marseille, who come to enjoy its magnificent natural landscapes. The district is located at the start of the Calanques de Marseille, on the side of a hill. You need to climb a little winding road to get there. With its famous fisherman's shacks, restaurants and bars you'll be seduced by the beauty of this place.

Immerse yourself in the rich and varied world of Marseille...
The Velodrome
The Velodrome is a legendary stadium that never fails to impress! First built in 1937, this stadium is home to the Olympique de Marseille football team. Its capacity now makes it the 2nd largest stadium in France, with 67,394 seats. The passion of its supporters and their boisterous songs have given the stadium quite the reputation.
Open for visits.

L'Olympique de Marseille
Founded in 1899, Olympique de Marseille is a legendary football club that provokes intense emotions. Match by match, this team has given France its greatest sporting moments (winning the European Cup, as well as several national trophies) but also some of its darkest times, all of which contribute to its legend!
Travel plan