According to a local writer, Gustave Roux, there is a legend that tells the tale of the four daughters of Prince Olbianus, Lord of Olbia (Hyères), who were all of incomparable beauty and exceptional swimmers. One day, while they were bathing in the sea along the coast, the sails of a pirate ship appeared on the horizon. Their desperate father prayed to the gods to save them, which caused a metamorphosis. The four princesses felt their limbs transform and solidify, and they were turned into islands.
The three furthest (Porquerolles, Port-cros and le Levant) make up the îles d'Or – the golden isles, while the daughter nearest the coast, already extending her arms out to her father, became the Giens peninsula. It is said that these islands have preserved the astonishing beauty of the princesses...


These 3 islands along the coast of Hyères are jewels decorating the deep blue sea. They boast a range of unique landscapes: idyllic beaches with turquoise waters, cliffs, pine woods and forts... a great place for walking or cycling trips of one day or more...
Porquerolles, the largest and most popular island, has the most beautiful beaches.
Port Cros, a National Park, is a paradise of underwater fauna and flora.
The isle of Levant is a popular spot for naturists.

The pearl of the Îles d'Or

The island of Porquerolles is often talked of as the pearl of the îles d'or archipelago.
It's the largest and westernmost of the 3 islands, with a surface area of 1254 hectares and 54 km of trails.
Crescent-shaped from east to west with the end cut off, the island culminates with the semaphore station at 142 m above sea level. The perimeter is about thirty kilometres.
The island is remarkable for its clean beaches, clear bathing water and well-preserved forests.
There are 2 sides to the island: in the south, a steep coast dominated by cliffs, with some hidden cliffs that are worth seeking out. In the north, a Caribbean feel with beaches of white sand and turquoise waters.
In the centre, cultivated fields with plant collections from the botanical conservatory. The village, at the end of a small harbour, has given its name to the whole island and was baptised about a hundred years ago by the military administration. The village was built in 1820, the lighthouse in 1837 and the church in 1850.

You can visit the islands throughout the year, with regular ferry boats or the taxi boat from the port of Hyères or the Tour Fondue. The crossing takes about 15 minutes to get to Porquerolles and an hour for Port-cros and Levant.

From June to September, you can also depart from Les Sablettes with Les Bateliers de La Côte d'Azur.

Tickets are available from our tourist offices

For anyone who loves beautiful beaches, no need to get on a plane and travel to the other side of the world: Porquerolles is a paradise on earth. It has many beaches, all equally beautiful... such as the Argent beach, Notre dame beach and la Courtade beach, the most famous and busiest of the beaches. Discover them on foot or by bike (there are several bike hire places).

The clean waters, majestic underwater landscapes and rich biodiversity of the marine park make Porquerolles one of the most beautiful spots in the Mediterranean.
There are dozens of sites (with shipwrecks and natural gorges) to delight divers.
There are burgeoning posidonia meadows with an abundance of salema porgy, sea cucumbers, sea urchins, groupers, moray eels, wrasses, sargos, gilt-head bream and many more.
Diving clubs on site. 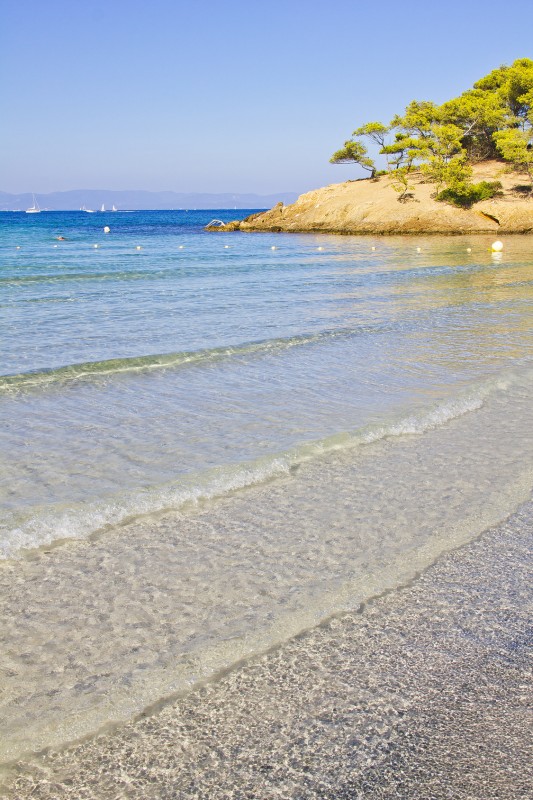 If you'd like to extend your visit to this magical island, you're free to stay: hotels, B&Bs, apartments to rent or even better, stay on a boat for a night in the harbour under the stars... and there's a wide choice of restaurants.
You can also discover the National Mediterranean Botanical Conservatory of Porquerolles, take a guided tour of the orchards and taste the local fruit, visit the Sainte Agathe fort and the Bonheur Mill, and more. 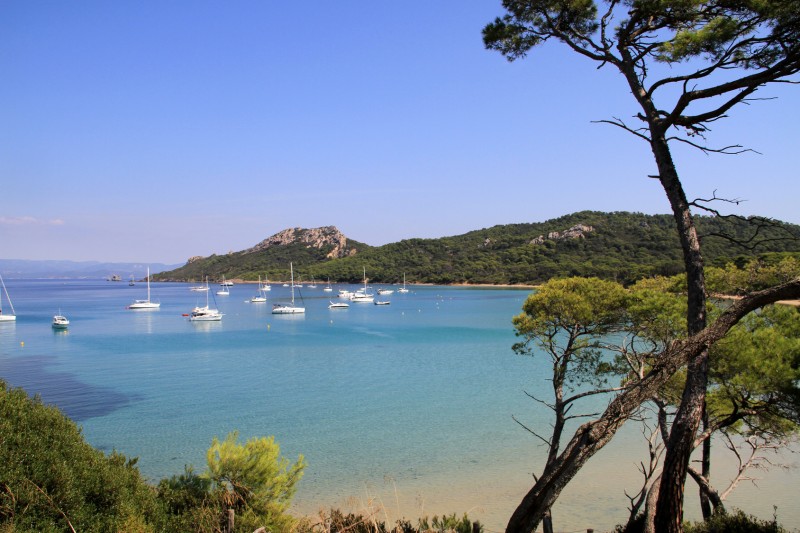